I am not… A photographer

I am not a photographer.

Sometimes I take photos. I know very little about photography, but I know what looks good (to me) and if I see an image I like; something that captures a thought or a moment and/or uplifts or inspires me, I will stop and take a photo. Sometimes I think they’re pretty good.

Here are some of the images I have saved over at Flickr, that I think might fit the ‘pretty good’ category: 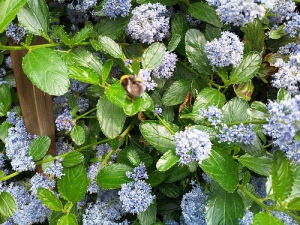 You may have noticed that I sometimes include images in my blog posts. Occasionally I will buy a photo from an image bank, but most of them I have taken myself. So now you know.

I am not a photographer, but sometimes I take photos. Some of them are alright.

I have just realised that my blog is now officially a year old! Well, one year and one month to be precise, the actual birth date (October 4th 2009) passed while I was taking a break.

But these details aren’t important. When I started this blog, I wasn’t sure how often I would post, and whether anyone would be interested in my ramblings, but here we are, just over a year later, and I have been (fairly) consistent so far, and many of you are reading! Again, I thank you.

So, as it’s my blog birthday, I would like you to share in the celebrations! I am offering two prizes – one for the first to post a comment below, and one for the most creative comment – any format is fine – you could write a poem, a short story, some prose, or post a photo or anything else you have created. Surprise me!

The first post will win an edible treat (to be agreed depending on your preferences and location!), and the winner of the most creative post will be the first to feature in a series of interviews I am planning, ‘Ordinary People,’ as well as an amazon voucher or cash prize (£10 or local currency equivalent). This competition will run for two weeks, and closes on Sunday 7th October, after which I will be in touch with the winners by email (so please do include your email address on your post).

So, it’s been less than a month since my last post but it feels like forever! I needed the break, yes, but I did miss writing and engaging with you. It’s good to be back.

So, why the sabbatical, so soon after my last? Well, as I mentioned, I needed the break, and the headspace to contemplate another shift in focus. As you know, I got married back in June, hence the break then. Since June, I’ve started a new job (same company, new role. I get to do more writing. It’s all good) and an intensive training course to which I want to give 100%. So far, a couple of good reasons for a shift in focus, no? Well, in addition to these new ventures, I also found out, around the time I got the new job, that I was pregnant! That required a major shift in my way of thinking.

Now, the pregnancy wasn’t a complete shock, after all, I had just got married…  But what I found most challenging of all was keeping it a secret. I know I’m not the first woman to fall pregnant and keep it to herself, and I certainly won’t be the last, and women have been managing to successfully (more or less) keep this particular secret to themselves for at least 12 weeks for centuries, but I underestimated how challenging this would be for me.

It’s not like I’ve never kept a secret before. We all have minor secrets, things we just don’t share with most people, and keeping those? No problem. When a friend shares a secret that’s ok too. I can discuss it with said friend, should I feel the need…  But this? It was hard. Especially in the face of quite a few people actually asking outright ‘so are you pregnant yet?’ and then having to lie because I didn’t want to announce it so early. It’s surprising how many of those who ask this question are women – I didn’t like lying to my friends, but I can only imagine how distressing it would be to be asked that question if I were unable to have children.

Pretending to be fine at work and when out with friends when I felt like crap and all I wanted to do was sleep for a week wasn’t easy either, but I got there in the end, and I am pleased to say that I am now almost 16 weeks pregnant (that’s four months – took me a while to get used to thinking in weeks!) and feeling much better. I’ve been told that the second trimester is the ‘honeymoon’ period of pregnancy, and as I am starting to enjoy my changing shape, instead of lamenting the body I had before, I can begin to see that. However, I don’t for a minute underestimate the fact that everything began to feel lighter and easier for me straight after my 12 week scan, when I was able to share my news.

Are there any other pregnant women or Mums out there who find the energy invested in keeping the big secret to be almost as exhausting as early pregnancy itself? Or is it just me? Please share your experiences below!